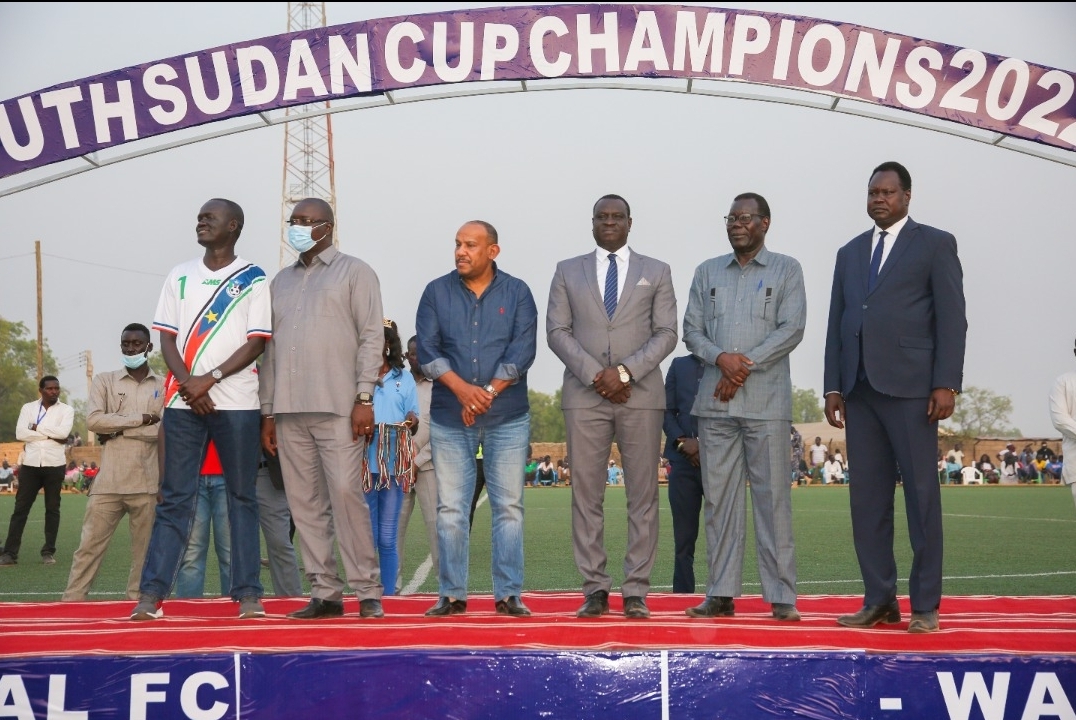 The 11th edition of the South Sudan cup came to a conclusion yesterday as Al-Hilal FC from Wau inaugurated champions of the competition, after a 2-nil (2:0) victory over Zalan FC from Rumbek.

The flamboyant event brought together more than 3000 sports lovers, to witness and grace the climax of the competition, among them are high government officials, business personnel among others.

President Augustino called on the National and the State government to help in building and improving infrastructures that will allow the youth to maximize their talents. The president gave an example of Upper Nile State, where floods disrupt normal lives and activities of the people.

“We need to give more opportunities for peace to prevail through keeping youths engaged in sports activities, and this can be done if we improved and build playgrounds for them,” he said

The president also called on the government and business personnel to invest and provide resources for sports, particularly the upcoming South Sudan Premier League and Peace tournament due to begin after the Women’s South Sudan Cup.

President Augustino said that he is concerned about the future of South Sudan football, therefore, revealing plans to initiate a Youth tournament targetting Academies from different States and the three administrative areas. This strategy is geared towards raising the standards of grassroots football in the country.

On the other hand, the Governor of Central Equatoria State, Hon. Emmanuel Adil Anthony together with the Minister of Culture Youth & Sports, Dr. Albino Bol Dhiew, all made a commitment to support the planned South Sudan Premier League and the South Sudan Peace Tournament.
Hon. Emmanuel Anthony issued a directive to all that have grabbed land meant for sports to evacuate with immediate effect,

“Because of this important occasion, I can see that football is a key factor to peacebuilding and sports brings peace, therefore, I issue a directive to all individuals, and groups of people who are occupying football pitches, kindly leave them for this great talent, otherwise, we shall come to remove you”. he said.

The governor was backed up by the minister of Culture, Youth & Sports, Dr. Albino Bol, saying that his administration is ready to work with the state government in restoring the lands meant for sports.